Important News for all Military Retirees regarding YOUR Retired ID Card! CLICK HERE

It takes a few seconds to download and it's worth your wait! 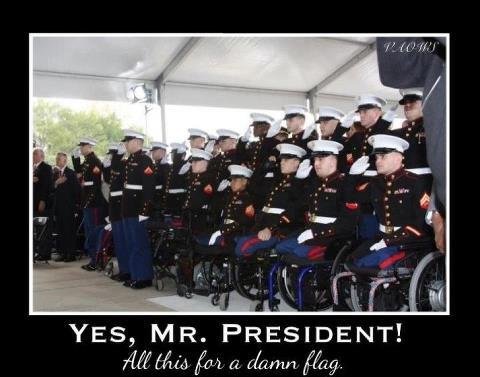 The Military Retiree Grass Roots Group (MRGRG) was comprised largely of a group of retired military personnel who were displeased greatly by the way the United States Government had not honored Promises Made to the retired military personnel of this country. We fought with "Sharpies" and letters written on "Brown-Paper bags", sent tons of fax'es and email messages and (occasionally) we fought in the courts of this great country... to have those "Promises Made" honored. Those who served a minimum of 20 years in the U.S. military during the 1940's and 50's were PROMISED; FREE medical care for life after their retirement... for themselves and their dependents.

Those who retired after 1957 were made similar promises [with conditions]... but were still promised FREE lifetime medical care on a space available basis. This promise was made to all members of the Air Force, the Army, the Navy, the Marines and Coast Guard and continued into the 1990's when it was stopped by the massive BRAC effort of the Clinton Administration.

For the 99% of American Citizens who never served in the U.S. Military... this promised "Lifetime Medical Care" was intended only for members of the U.S. Military who served a full 20 years or longer (to retirement) for this promised care. We served in less than the best conditions for considerably less money than our contemporaties. We served for a REDUCED Salary that was to be made up "After Retirement" by FREE Lifetime Medical Care - only to be denied our PROMISED Medical care when we needed it the most... in our "out years"! This PROMISED Lifetime Medical Care (after retirement) was "intended" to make up for the menial wages we received during those long years... often separated from our husbands or wives and families for months and sometimes years at a time.

The opening line in the paragraph above is NOT intended as a negative statement... rather, it is an acknowledgment of our problem! Only about one percent (1 %) of the actual population of our great nation volunteer and serve in the military. And only a SMALL percentage of those who do enlist actually make a career of the Military. So you see, there are a very few of us who actually take the responsibility for keeping YOU, the other 99% FREE. Don't you think it's time that Congress actually paid us what our Government said that we would be paid? The long term payment was to be a meager monthly "retainer check" (a small percentage of what we were being paid when we retired) and all the medical care we actually needed... until we died! For many military persons, that is not a long time... If you do your research, MANY retirees don't last long! They can't seem to take the stress of peacetime life...

During a campaign speech by (then President) George W. Bush, he said (referring to the military) that "Promises Made would be Promises Kept" and he failed to act on that pledge. Obviously he was not concerned about our votes in the Nov 2004 election. In the words of an "insider" President Bush intended to honor his pledge... and then someone told him how much it would cost. Obviously he did not feel that we were worth what it would have cost! Those who voted for him either loved Bush or voted against John Kerry! Whatever the reason, Bush was re-elected! So we got busy and start early writing him letters asking him to honor his pledge to us. We were totally ignored. We kept sending letters, faxes and emails. Then the DoD started attacking with all the force they could muster... to take away even more than what we had already lost.

NOTE: If you're currently serving (or know someone who is) please take note that if you are promised something while you are in the service of your country... if it's not in writing and backed up by a LAW passed by Congress and signed by a sitting president of the USA, you just joined the rest of us in being lied to and screwed at the same time!


The next time you hear your Congressman or Senator, or anyone for that matter...
knocking the Military and How Expensive it is to operate... just remember:

"WITHOUT THE U.S. MILITARY--THERE WOULD BE NO FREE AMERICA"...
where you can whine publicly without being shot! (For now, at least...) 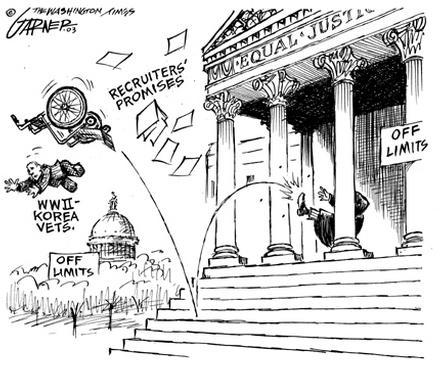 The Supreme Court has, in a shocking decision, refused to hear our case.
CLICK HERE to read the Washington Times piece on the court's decision.

Click HERE to see photographs of the Retirees marching on 12 February 2003
to the Supreme Court and the Capitol.

Also, Click HERE to see more photographs of the Retirees marching on 12 February 2003.


Just always remember:
"If it was NOT for the U.S. Military, there would be NO FREE America as we know it today!"
Our U.S. Congress, and much of the American public, seems to have forgotten that fact!

The next time you see an "Active Duty" military person, in uniform, on the street, Walk-Up and THANK THEM for THEIR SERVICE! You'll see their face Light Up! If you were "Mis-Treated" when you came home from Viet Nam, Korea or elsewhere... this is your chance to Make a Difference! Thank our troops for their service! They're getting little else, especially from a majority of the sitting members of Congress!

On the MAIN MRGRG website there were links that explained the Tricare for Life (TFL) program that congress provided to the Retired Military community as an attempt to replace the lost medical care we were PROMISED and continue to be DENIED. That website has expired with the passing of Floyd Sears, the site's webmaster and one of the fine Retired Military Members who fought for our Promised Health Care. The initial idea was great until our Congressmen and Senators in Congress stripped it's benefits by tying it to Medicare which is not sufficiently funded and as a result... most doctors will not accept TFL patients.

That's why many retirees jokingly call TriCare... "Try and Get Care."

The Retired Military Advocate web site went on-line on 17 September 1997 to assist the military retirees regain the medical care they were promised before their retirement.

TFL became effective on 1 Oct 2001. THIS WAS EXTRACTED FROM A MOAA WEB PAGE... The Floyd D. Spence National Defense Authorization Act for Fiscal Year 2001, directed the establishment of the Medicare-Eligible Retiree Health Care Fund (acronym is MERHCF), to pay for Medicare-eligible retiree health care beginning in 2002 via a new program called TRICARE for Life.

This TFL entitlement came about as the result of Congressional lobbying by various Veterans Service Organizations in Washington and by a group of military retirees working at the grass roots level that came to be known as the Class Act Group (CAG), and the Military Retiree Grass Roots Group (MRGRG). This web site is dedicated to the individuals of these two groups.

The CAG and the MRGRG was not an organization, it was a group of individuals with a common goal of regaining the benefits promised to military retirees before their retirement. They influenced, supported, and communicated with each other via the Internet, but each individual was responsible for his/her own actions.

The efforts at the grass roots level to regain the medical care that was promised to military retirees before their retirement focused on educating the American people via letters to the editor, pickets, demonstrations, and billboards. The efforts to educate and influence the Congress were accomplished via e-mails, letters, FAXes, phone calls, group meetings, and one-on-one meetings.

If you were involved in any of these activities to influence the Congress then you are a member of the MRGRG and this web page is dedicated to you.

I am a United States Military Retiree.
I am a tested warrior.
For 20 or more years I answered my nation's call.

I am a United States Military Retiree.
My mission is to stay active in retirement, fight for what we were promised while on active duty, and win.
I am faithful to a proud heritage, a tradition of honor, and a legacy of valor.

I am a United States Military Retiree.
Guardian of our freedom and justice in the nation's courts, my nation's sword and shield, its sentry and avenger.
I swore that I would defended my country with my life.

I pledge allegiance to the Flag
of the United States of America,
and to the Republic for which it stands:
one Nation under God, indivisible,
With Liberty and Justice for all.


I am a retired American military fighting man.  I served in the Armed Forces, which guarded our country and our way of life.  I was prepared to give my life in my country's defense. I will never forget that I was an American military fighting man, responsible for my actions, and dedicated to the principles, which made our country free.  I will continue to trust in my God and in the United States of America, and I will continue the fight (verbally and in writing) to regain the medical care that was promised to the American Military Retirees before their retirement for as long as I live. I ask you; Are we a forgotten albatross?  Pure, simple, and to the point , is the United States an ingrate nation? I reflect on the times of my military service.  I willingly, with the pride and fervor of the "brotherhood", risked it all. I risked making the mother of my children a widow and my children fatherless. That was my job, in my chosen profession. I felt I could give my all because, in my death, my widow and children would be taken care of, with free medical care for life, by those whom I willingly served. How stupidly foolish I was.  I cringe at the thought of how duped my comrades-in-arms were.  Look today where our 'Gold Star Mothers are, healthcare wise.  In the same mediocre, socialized medicine quagmire that serves not well the lethargic 'subjects' of the lying king, our US Congress. In addition, for this I risked all in the service to my country?  I am chagrined, ashamed that I was so stupid as to serve such an ingrate nation, populated to the most part by the 'kings' of ungrateful and unthankful Congressional subjects.

What Is An American?

To understand a Military Veteran, you must know these things...

How to get Rich Fast..Be a Tricare Contractor

A Marine sniper's reply to a dumb question

POSTERS AND CARTOONS OF MERIT

A Poem Worth Reading 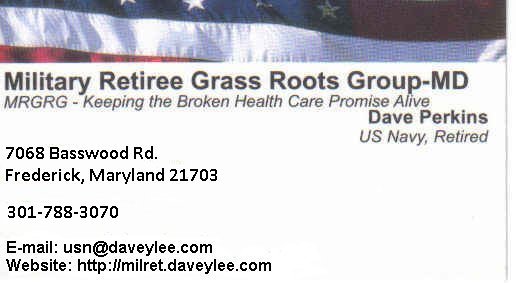